This is a story about ‘MY PAL SAL’, a newer resident here at Assisted Living. (Side note: the translation of his name from the Italian is “GOOD MORNING SAVIOR”).

SAL came to the Saint Joseph’s Senior Home at the beginning of September. He’s ninety-one years old, quite robust for his age and communicates with ease.  We sit at the same table and chat during meals. It so happens that we have similar backgrounds. Both of us are the offspring of immigrant Italian parents and lived in the same section of Staten Island where we possibly crossed paths without knowing it.

Sal started his life in Brooklyn, N.Y.,  in 1928, went to Catholic school, did a stint in the army at the end of WW2, and later beca 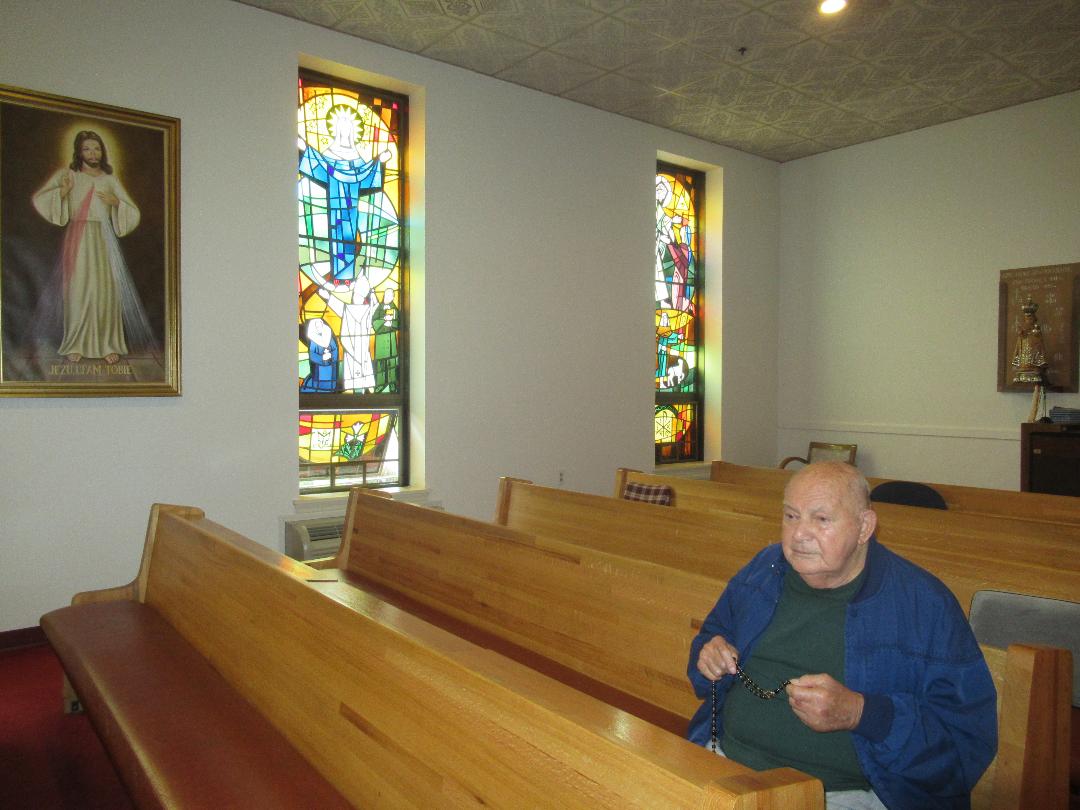 me a union mason and bricklayer helping to build many housing projects in Brooklyn. Eventually, he joined the NYC Transit Authority and worked as a mason there for twenty years.

In the midst of all of the above, SAL married his childhood sweetheart Phyllis in 1954, made a family by having two daughters and lived in Staten Island for thirty-five years. Phyllis died in 1996 and was interred nearby in Woodbridge. SAL visited his wife every day for more than a year, sometimes staying for more than five hours.

In 2017 SAL took a fall at his house that caused a serious injury to his hip. Surgery was needed to repair the damage. After his hospital stay and after checking out several Assisted Living places on Staten Island, he decided to live with his daughter Cindy in Pennsylvania, which lasted only a short time.

AND THAT’S EXACTLY THE REASON THAT SAL CAME TO LIVE IN SAINT JOSEPH’S SENIOR HOME!

SAL is a faithful Catholic. He prays the ROSARY and CHAPLET of DIVINE MERCY several times a day. During his time in Staten Island, he faithfully sought churches that offered twenty-four-hour EXPOSITION OF THE BLESSED SACRAMENT. When he found out as a result of his investigation that SJSH offered daily Mass, communal saying of the Rosary and the Chaplet of Divine Mercy and many other regular Catholic exercises, he was eager to join us.  In addition, he was delighted that the chapel was open all day and all night and had both a live-in Chaplain and a staff of resident Sisters, who belong to the order of the LITTLE SERVANT SISTERS OF THE IMMACULATE CONCEPTION.  SAL sincerely believes that it was a personal miracle that led him to this facility that we are so proud of. He further says that the past months of his residency have been exactly what he wished for. He’s delighted with the caring treatment and assistance, the accommodations, the food service, the activities and most of all that he can sit quietly in the chapel and say his Rosary and the Chaplet to Divine Mercy.